I should post this before the new school year starts, huh?

Here is my background in brief:
There was either no Chinese school in Halifax in the 1980s or my mum didn’t know about it or she didn’t want me to associate with “riff-raff” (i.e., other people’s kids). Mum was equipped (Chinese being her first language) to teach me. I, on the other hand, wanted interaction with Chinese peers since I had barely any because I attended private school. With flash cards she made herself and materials shipped from Hong Kong, she taught me more successfully than she did my sister five years down the road and my interest was revived when I was in high school. I began speaking it again and brushing up on characters and writing. Of course, I rue my misspent youth not learning Mandarin but it just wasn’t on the horizon until “too late”.

As for Kiddo, I wanted him to attend the “Chinese Catholic” school that is very close to where we live more for the Chinese classes four times a week throughout eight years of elementary school than learning to be compassionate what have you. That makes me an undesirable school parent and add to that interviewing poorly (both parent and child – NPY was just fine), we were deemed not a “good fit” and Kiddo was relegated, in my opinion, like so many others to learning Chinese on the side, aka, going to Chinese school.

I looked into Langara and the Richmond School Board and Pui Ying organization. It was an easy decision once I remembered that the Chinese Cultural Centre in Chinatown has Chinese classes at the SK Lee Academy. Chinese class in Chinatown – I picture Kiddo and me wandering Chinatown after classes. Wouldn’t Chinese around him in Chinatown reinforce why he’s learning it? It’s what I wanted for myself. Plus, Chinatown is very close to where we live. When I went in-person to register him, though, I felt like I wasn’t Chinese enough to put my child in the school but it’s not a criteria – just my own self-consciousness. I didn’t know how to fill out the firm that was not translated, but I could communicate with the staff who speak Cantonese and I didn’t feel like I’m the only parent in the same bind.

Kiddo has a friend who started Chinese school in the fall the last year they were in daycare. I must remember that his friend, six months older than Kiddo, was 4 years 9 months at the time he started Chinese school. I felt like Kiddo was behind, that he could have started in the fall at the age of 4, too, if I had met the mom then. So, in January 2020, Kiddo attended one class with his friend. I sat with Kiddo in the back of the classroom to keep him company and get an idea of what I’m signing him up for and was just in bewilderment how kids learn in that environment. The teacher spoke only in Chinese and some kids were responding but others were speaking in English and the teacher persisted. It seemed like no one was really paying attention and we were lost just understanding what the activity was. January is mid-semester and not the time to start!

Return (starting) school in September 2020 in the midst of Covid was a different beast. The culture centre and basically everyone was offering classes over Zoom. Given Kiddo’s age and it’s his first year of Mandarin school, he was assigned to the Pre-School class. I opted for traditional characters for my benefit, to support traditional characters, and to increase likelihood of his classmates also being of Hong Kong background. The 90-minute class started at 4:00 pm but later was bumped to 3:30 which was terrible to get home for after 3:05 p.m. dismissal but we were grateful it was over at 5 p.m. instead of 5:30.

Within the first couple of classes, a parent asked the teacher why the class doesn’t have any English explanation of what they are learning, the syllabus for the day, etc. The teacher seemed baffled why there should be English spoken when it’s a Mandarin class. But I understand now, if she speak too much English, it’s not enough immersion during that 90-minute class. She keeps at it in Mandarin and the kids and parents start to understand the core words.

From my experience, Mandarin classes over Zoom involved as much effort of parents as kids. They were assigned weekly homework and wouldn’t know heads or tails what to do if the parents didn’t follow along or understand the homework assignment written entirely in Chinese. The parents took photos of the syllabus, nursery songs and the homework slide, asking questions for clarification. I felt like the sole parent who didn’t understand Mandarin and some of the Cantonese-speaking grandparents who monitored their grandkids’ class could crank out some Mandarin to communicate with the teacher. Some kids clearly spoke Mandarin already and could be conversational with the teacher. Every kid would get something out of the class and it was not geared only at native speakers.

At lease I do “know” Pinyin. At least I know Chinese and want to improve mine. I found an engaging way for Kiddo to learn bopomofo via the bopomofo song that I try to sing instead of ABC and Twinkle Twinkle to Baby. At least NPY can understand Mandarin either by deduction or really focusing on what’s being said. What does some other CBC kid do if the parents don’t have this?

In all, Kiddo was quite good all year when you take into account he was five-and-a-quarter at the start of the school year and when he did start attending school in person in November, he had to swing school from 8:55 a.m. to 2:55 p.m. and then Mandarin class from 3:30 to 5:00 p.m. It’s a lot for a kid and I don’t know for how many years it will be “a lot” for a kid. Some days were worse than others. He picked up bad habits like trying to colour and not paying attention. Worst of all, he was snacking and then he wouldn’t repeat the words or sing along. We had no childcare for Baby on Tuesdays and when I started working in January and monitoring his class, NPY took to taking her out for a walk for 30+ minutes which helped during the 90-minute class.

Kiddo was good about writing practice and it’s fascination to see what they struggle with, the spatial aspect of writing characters. He was reading characters well but I would learn and we figured out he could recite them without reading. But he would recognize them on their own, too. He was not as keen on the songs. And did he understand what was going on in class? Only by routine did I know, and he still didn’t at the end of the school year.

There was an exam in December and another in June, which is more scholastic than is. The exam in December was the wake-up call for me to get him to learn his songs! Thank freaking goodness the teacher picked the one poem he did know. I learned that if I told him how many times we would recite it, he would realize it was a finite and small number and before he knew it, he knew it. He would claim that 大牛小羊 is his very favourite and say he could recite it forever. It’s the pride and happiness associated with mastery that I am trying to get him to understand that my mother tried to instill in me.

The teacher would show the same terrible 聲母 (initials) and 韻母 (finals) videos all year long and we got used to them and knew it was time to sing along. She also showed videos that Kiddo was familiar with from YouTube, like Baby Bus.

Kiddo nailed the final exam. I still had worries we hadn’t practiced the correct set of recitations/songs but all the students ended up reciting 大牛小羊 which was almost disappointing but he got it. When he had to pronounce the initials and finals, he did not follow what the teacher was pointing at, he was not used to the font so when she chose one for him to pronounce, I would point to it on the paper we spent all year learning from – see below.

Back in June, I mulled over whether he would take the summer off from Mandarin lessons. There was an eight-week course on Saturdays and I was learning towards having an academic aspect to his summer. However, he would be fine with the break as I imagine most kids take the break. I hoped that we’d find some time to have fun writing characters but between back-to-back camps and him being so in play mode, we did not. I wanted us to explore more related characters that allows him to learn characters off-syllabus (like 巾, 布, 希). Over the school year, his favourite characters were 土, 人, 父.

In the last classes, the teacher took a survey to see who planned on continuing with Zoom lessons and who wanted to attend in-person this fall. Online classes seem to be favoured and I could see why: convenient to “get to class” and parents could keep tabs and understand the expectations on the kids. I’m so remiss about the lack of learning together, and I think he wouldn’t get away with being not interactive if he were in class! Tuesdays were my least favourite day of the week all year because of having to keep Baby from being a distraction and then it was triple whammy if it was a busy afternoon at work on top of it all.

I joked that I will try to interview Baby for Chinese Catholic school too. Maybe she can get it while Kiddo was not accepted. I might start her in Chinese school a year earlier than Kiddo did since they accept students who are age four at the beginning of the school year and it’s feasible for them to attend a 90- (or 120-) minute class if it is in-person. I was hoping that she would have a leg up on Mandarin because she heads Kiddo learning it and reciting it, because she could turn out to have a knack for languages. As it turns out, I need her to start earlier because there are too many influences for her to learn English! 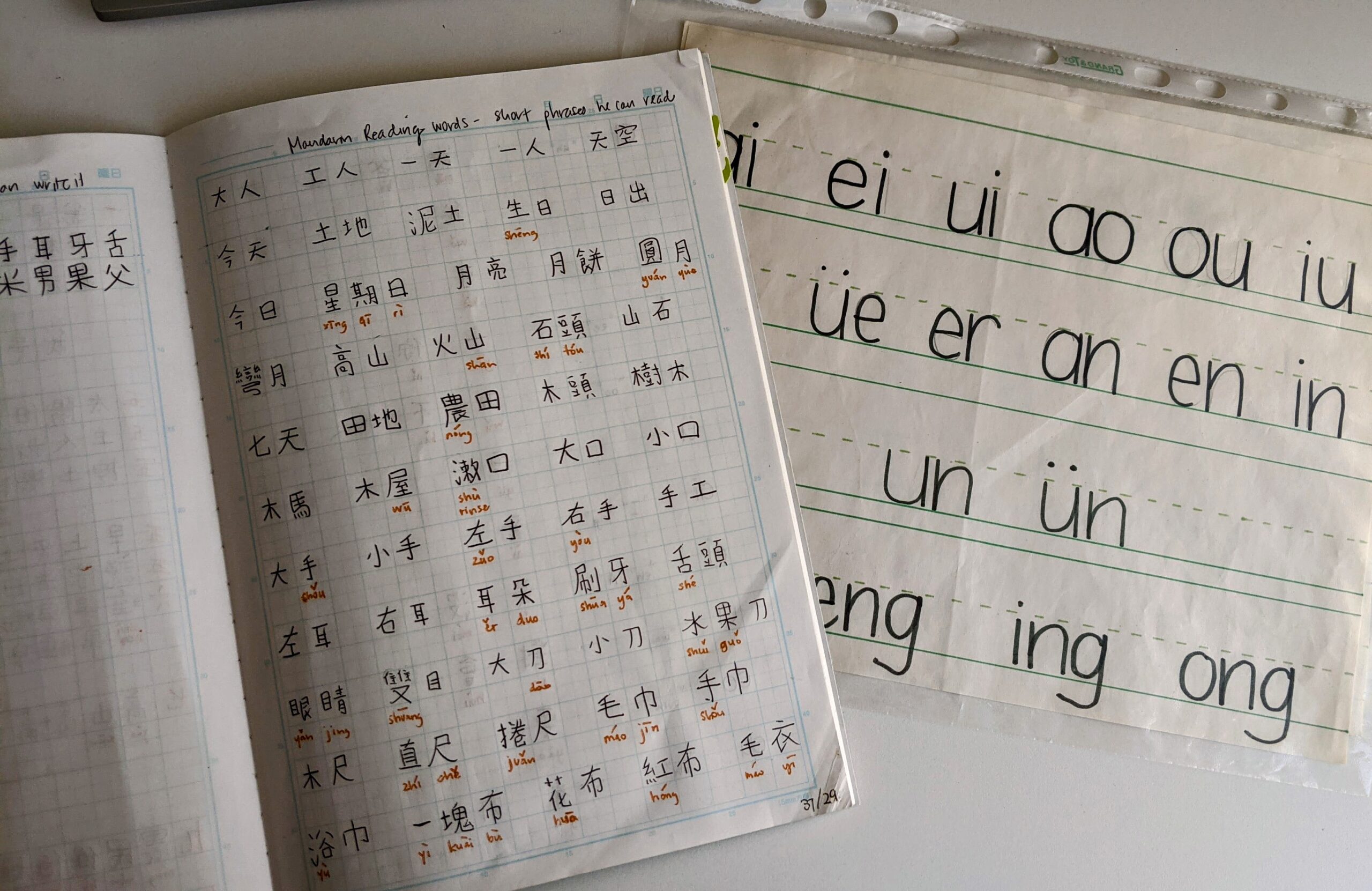