Several months ago, Jean Wang (Extra Petite blogger) showed in her Stories the cute set of books her toddler adores and she got an avalanche of questions about the series because she has like half a million follows and then they bought every copy Jojo Learning had. For a few months at least, I could recognize this set anywhere and I went to the biggest bookstore in Chinatown to see if it wasn’t a treasure trove of books, old and new, a hidden gem….

Not so much. Nothing (in the kids section) looked newer than 1990 and it seemed like the books were coated in a layer of dust and had faded covers from years on the shelves. There were no big names it seemed.

So I could recognize the set when it turned up among recommendations on Amazon when I was considering buying a Bao Bao Learns Chinese music book for my niece. Amazon sure knew how to recommend books during Lunar New Year.

By the way, Jojo Learning looks so good and one day later this year after careful considering, I will splurge on some pop culture books or something.

Right away I want to read and understand these stories so that I can read without stumbling (too much) for Kiddo who is not keen as it is to hear me speaking something that is not our Chinese and fast not so interested in toddler-cute stories. However, the vocabulary and concepts are on par for he who wants to delve into (age) 10+ Star Wars and (age) 7+ Ninjago stories. He has been part of a school Home Reading program for a month, reading tiny books with simple phonics and learning sight words. I’ve been envious of his progress in English versus not having texts for him in Chinese (until now). He is capable of “reading” more than the 25 or so characters he can write, having been reading (or memorizing their place on the page) terms (see last image in this post). I’m really hoping that this series could really launch things for him.

If not, I’ll be familiar with the words and stories when it’s Baby’s turn!

I have my whatever-level-it-is basis in Mandarin/Pinyin but right off the bat, there are words I don’t know off hand and having the Pinyin noted helps me from guessing and teaching him wrong. I’ve annotated tidily in a hard lead pencil, a bit apart from the characters, as a prompt. I’m defiling the books immediately! But that is the way with bilingual learning! 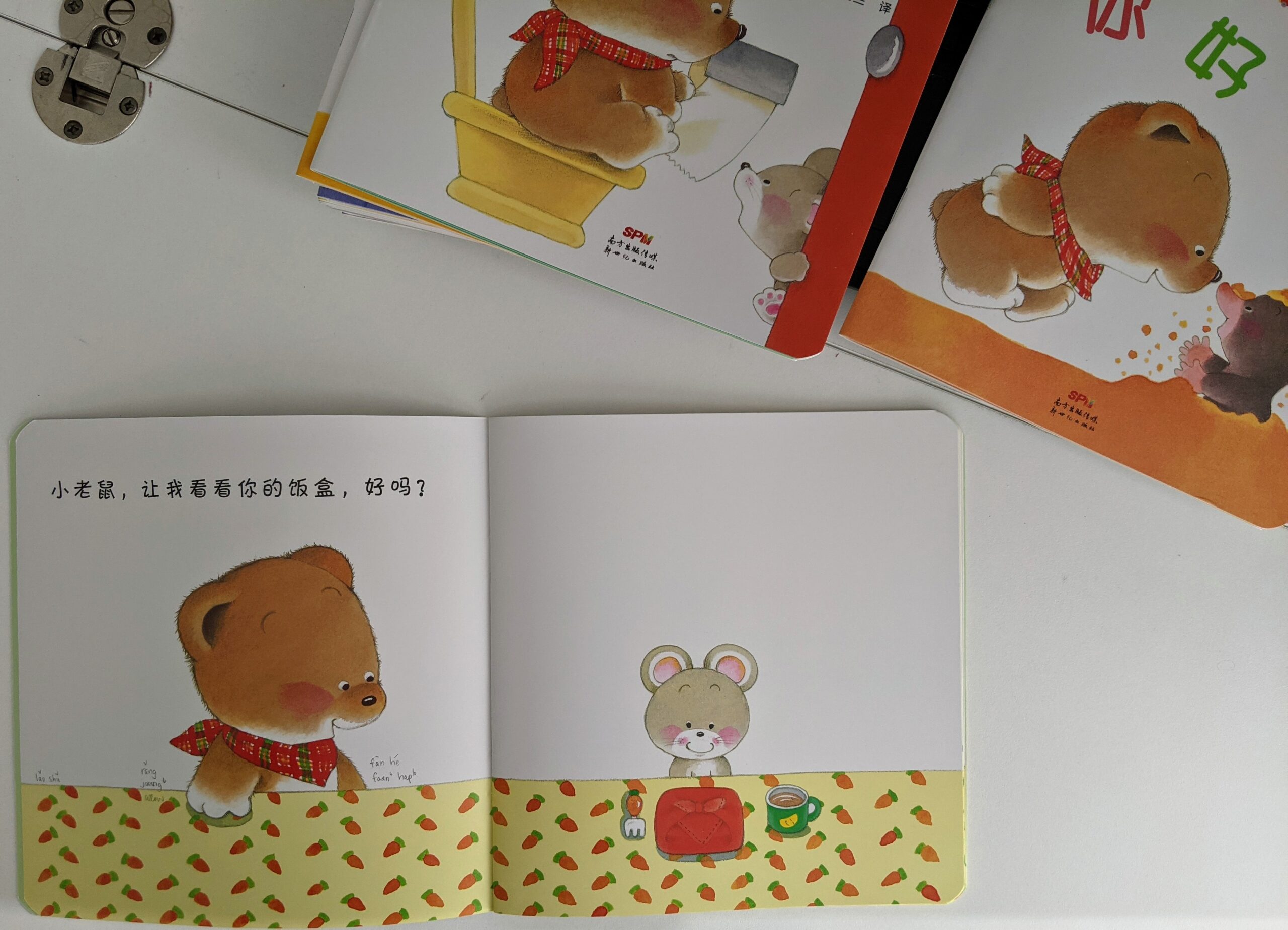 Pleco has been super handy for annotating because I can use the handwriting mode to scribble in the characters I don’t understand. I can throw all the characters I didn’t know the Pinyin for even though they didn’t appear consecutively in the text and Pleco translated them knowing the common groupings of the characters.

I had entered “叫名字時該怎麼” into Pleco and it provided definitions for 叫, 名字, 時, 該 and 怎麼. I learned not to have to do separate searches.

I also appreciate that I do have my level of knowledge of Chinese (Cantonese, Mandarin, Pinyin) because some other people I know who are keen to have their child(ren) learn Chinese would struggle more with this exercise. At the end of each volume is this – what is it – addendum to the story? It’s more advanced text, not accompanied by cute images and not my first priority to translate!

As mentioned above, here is a photo of the exercise book I keep to aid Kiddo’s Mandarin lessons. On the left page, are the words he’s learned to right and should be able to reproduce on dictation. On the left page is the list of terms that use the words he has learned to write. With practice (the key to all progress), he can “read” all the terms and while his recitations are rubbish, we’re keeping on top of the “reading”!

He appreciated long before how 星 in 星期日 has the 日 and 生 that he sees in the term 生日. He can recognize that other characters like bed (床) have the character he’s learned, 木, and why that is so.