If there is one thing I never feel guilty of, it is buying books. We indulge Kiddo in buying him toys. More than I would like, but certainly less than his peers, I think. And which of these toys will be lovingly handed down? I know it’s not about that and he certainly gets enjoyment and uses his imagination but I sure wish he liked more/my books more! When Chalk Academy reviewed Chinese picture dictionaries, this volume came out on top. I envisioned Kiddo and me flipping through and learning a whole bunch of concepts and be able to name them because of the characters and Pinyin provided. It is a bit above his age. 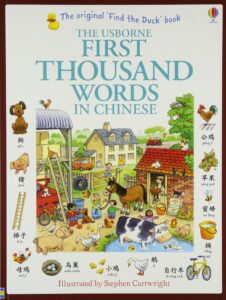 Thus I also purchased this volume that is targeted for younger kids, also learning a lot of associated words with the assistance of the characters and Pinyin. I only got the paperback copy. 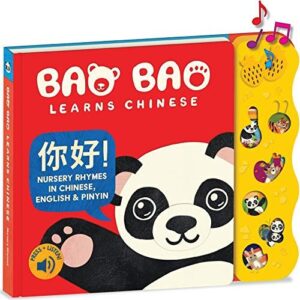 Chalk Academy recommends Bao Bao Learns Chinese in several posts and on her Instagram and she even hosted a giveaway for which I was not eligible (and probably would not have won)! Just head of Christmas 2019, I bought the Pinkfong Baby Shark Christmas music book and Kiddo loved it and even if I felt it was an expensive singing book ($25?), it was well worth it to hear him learning the songs. It’s in English and super-high pitch. From January to late November, it’s a box in storage with the rest of the Christmas stuff! Chalk Academy points out how the voices and instruments are real and soothing and we agree and are grateful for that when Baby keeps pressing the buttons over and over. I even gifted the second volume to my niece for Lunar Near Year this year.

As I repeatedly search and weighed my decision to buy the Bao Bao book above and Lunar New Year draws near, this highly rated book was recommended. Amongst the book-seller websites, I don’t see previews of the pages but I trust it will be fun to read to Kiddo once and it’s a durable board book for Baby. Without attaching more occult tidbits on Kiddo, he does know the animals ascribed to his, Baby’s, mine and NPY’s birth years and this would expand on his knowledge a bit.

Another “Customers who viewed this ended up buying … ” recommendation was this Peppa story. Kiddo enjoyed Peppa a lot as a young toddler and I don’t think we’ve seen this story/episode too many times, if at all. Baby and my niece were both born in Year of the Pig so my sister and I can easily overdo it with the pig theme … !

Eyes That Kiss in the Corners 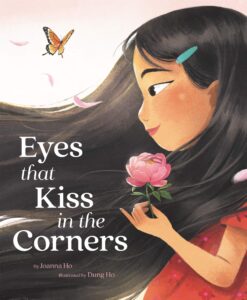 Here’s hoping that shaming (female) Asians because their eyelids aren’t the same as what’s deemed beautiful by Western standards of beauty is all but gone for Kiddo and Baby’s generation. I had the double-eyelid when I was younger and my real eyes came through as I grew up, however, my mother would keep at me for not sleeping enough as if that is the solution to precanthal folds. Even if that would help, she was still instilling me an aversion to what is natural and not ugly! I can’t remember where I heard of this book first and I’m afraid Kiddo probably won’t connect to it or desire to read it with me even once, but Chalk Academy did review it earlier this year. 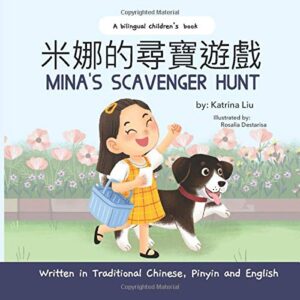 I also heard about Mina through Chalk Academy through Instagram posts. Mina’s mama didn’t see stories for her daughter that were diverse and Mina could see herself in so she wrote these illustrate stories that are bilingual. Seeing a bit of a theme here? Bilingual books representing, to show the kiddos that we are dual language around here. Earlier on, I didn’t think I could find Mina books other than on Amazon but now I have. The selection is not as big as on Amazon.com and I wondered if I should get the going to school one or the newer scavenger hunt story. Also, I noted how the grandparents books were both addressed to the maternal grandparents! 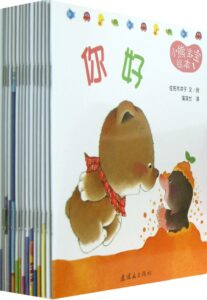 This set was recommended by Jean Wang. She showed in her stories this set that her toddler loves and then everyone wanted to know which set it was and she pointed us to JoJo Learning and given her following is like half a million strong, they cleaned out JoJo’s stock. I hesitated because of cross-border shopping (exchange rate and duties, etc.) but noted that US$2 is a decent price for a thin volume if it’s recommended and quality. I also didn’t think it was on a Canan book-seller but it came up in Amazon recommendations and there I go buying it too! I also have sets which my mother purchased from Hong Kong, now authentically vintage, and might be at a higher reading level because my mother is fluent.

We’ll see where the kiddos Chinese language journey leads them because I simply must accept that each child is different (mine from Chalk Academy’s impressive older child) and that each of my children are different from each other.

I don’t even want to get started thinking about Luka the reading robot, or reading pens (Youdao, Le Le)! I’ll just say that we aren’t there yet and I’ll cross that bridge when we get there!