My dental hygenist at City Square Dental Center gave me the news three appointments ago (i.e., a year ago, since I had my last appointment recently) that an Asian grocer was moving into the spot previously occupied by a Safeway. I used to live a few blocks away from City Square but have moved away eight years ago. Still, I have a great interest in what goes on in that mall, the local mall and food fair to the locals (duh) and the nearby medical institutions including the BC Cancery Agency and Center for Disease Control. The hospital (VGH) isn’t so far away either, although a couple of blocks further away.

Dustin, my hygenist, threw out the name “T&T”, but that’s just because it’s basically the only Asian grocer around. There’s a Foody Mart in Richmond that I visited once and has two locations in Toronto – there’s a definite and slightly frightening – to me – air of Mainland China in that sterile, overly large store and so – besides that the only BC Foody Mart is in Richmond – it’s usually just Taiwan-based T&T for us.

Two dentist appointments ago, I was in such a rush, I forgot to look across from the clinic to see the progress of the renovations. I suspect that I would have seen nothing at all of interest.

During my latest appointment, in November, things were still under wraps and it was only in the past few weeks that they have opened. I checked out City Square and confirmed the market is opened once (on Nov 29) and then shopped a week later (on Dec 2). Upon first learning of the new grocery chain moving in, Sungiven Foods, I naturally googled them. They are big in Xian and given how big China is, do you need much more than to be big in one province? Then I read an article that described how the founders spent some time in Canada before creating their grocery concept (far more non-GMO and transparency) in China, so there is a Vancouver connection and furthe reason that Canadian expansion begins in BC.

Like a child, I was attracted to and impressed by the bright signage and balloon arch. 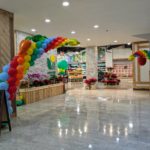 It didn’t take long at all for me to be able to draw comparisons to Trader Joe’s which is obviously where the founders got their inspiration. From the layout of the fruit and produce section, to the feeling of the aisles. 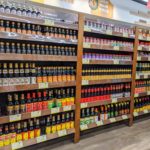 And if that weren’t concrete enough, some blatant homages/copycat can be seen in the Tasting Corner with samples and self-serve coffee, the style of the cash registers complete with the brass bell, and chalkboard signage to market products at the ends of aisles. I find it a smidge insincere to have such a large Chinglish sign reading “See you next day!” unless you tell me that every store has the very same wording. 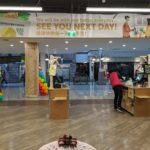 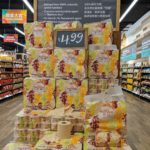 Like Trader Joe’s, there a couple of house brands, presumably cheaper than the same product they also bring in from another brand. 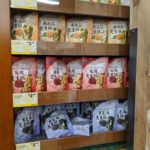 And since Kirin is in the same building, apparently you can get some small trays of dim sum from them. It seems to a food item disparate from the rest of the product offering.

On my second visit, I was ready to shop!

So when I was in the produce section, I noticed how they “borrowed” Trader Joe’s tactic of selling bananas singly and for $0.25 each. And then my attention was drawn to the overhead art that celebrates the local area – just like I’ve been and admired in many a Trader Joe’s. 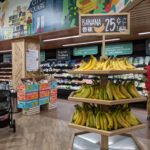 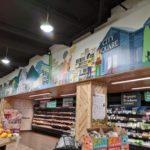 The prices seemed fair such as a larger 5-pack of garlic for $0.88. Like at T&T, certain products are pre-packaged for you. I bought mushrooms and mini sweet potatoes in this fashion. 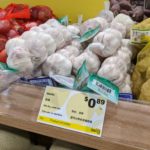 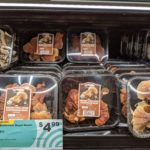 I even learned there is a tiny “Chinese buns” section. 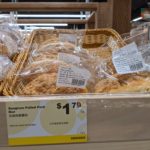 I was in the market for some soy sauce so I noticed and appreciated the transparency when you’re getting 30% oyster sauce versus 70%. But I just got some normal soy sauce at a good price as well as a mini bottole of “black bean soy sauce”, whatever that might be. 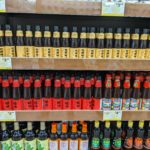 Copy or homage or not, I’m excited that a new grocer has entered the foray and that one of the locations is so convenient to where I used to live (Cambie Village Pride). I can hardly recall the former Safeway and know that it was jam-packed by comparison to the current aesthetic. I hope this expansion survives and thrives starting with the CIty Square locaton!