Let me tell you about the mini drama surrounding baby’s birth. I opted for a C-section as that is how kiddo was born and the surgeon who delivered him estimated that there was over a 50% chance I would not end up delivering baby naturally. Where she got that number when there wasn’t a particular reason why kiddo ended up being an emergency C – unless that itself is the reason – I don’t know but it was an “expert opinion” that I went with. Also, with a toddler and working full-time, um, why not schedule it when it has the second best odds for me and baby – after the natural birth that if I attempt in order to achieve the best odds and then end up with an emergency C-section again, puts me at worse odds than the scheduled C-section. You see what I mean?

Anyways, with baby’s due date on July 10, the C-section would not be scheduled earlier than Wednesday, July 3 and they gave me the three dates of July 3, 4 and 5 to order by my preference. Meanwhile, there’s chatter swirling around me from the in-laws (MIL, to be honest) to let them help me pick a date. Hellz no. It’s one thing for her to pick my wedding date but this is my health we’re talking about. I went to the OB appointment alone and when asked to submit my preferences amongst those three dates, chose July 3, July 5, then July 4. I was thinking that obviously the earliest date would be my first choice, and if not, I’d hang in there until July 5, to avoid the “4” in baby’s birthday – superficial Chinese numerology – and if I got my last choice (July 4), I wouldn’t exactly be remiss because then I didn’t have to stress out about or potentially not making it until July 5, the second choice.

After I submitted my preferences and before I got the surgery date, I told MIL my selections and she just couldn’t respond – there was no date to work with. Also, I made up my mind indepedently. Because it’s my body and a health issue. We got the July 4 date and NPY asked me what I thought about being given my lowest preference – cuz he would think there was a conspiracy to give little ole me the shaft – and I explained how July 4 is last choice for the benefit of those superstitious but it’s definitely reassuring I didn’t have to wait until July 5.

After baby was born, MIL learned of the birth hour and then sidled up next to me to tell me that it turns out to be auspicious. Which is fortunate for her because I could respond graciously. And if it was not? Other than that, I don”t want to know any more. I might know just a smidge more about the Boar/Pig sign because it’s my sister’s sign, but I don’t want decisions about the kids to be influenced by the occult.

I was at Chapters and browsing the clearance shelves, the second of which brought me right next to the occult books. After flipping through Millenneagram: The Enneagram Guide for Discovering Your Truest, Baddest Self, entirely because of its cover, and noting that there exists The Mermaid Handbook, my eyes are superr-attuned to the tell-tale red-and-gold of a Chinese book: Man-Ho Kwok and Martin Palmer’s Chinese Astrology: Forecast Your Future. It’s a slender book and it’s easy to get started and read all about yourself (your zodiac sign). It was also a hefty price information I could have collected from a multitude of sites on the Internet.

To give you an idea of the information available in the book – or on the Internet – I took photos strictly for my zodiac sign. I barely remember what the kiddos’ signs (Sheep & Pig) mean and surely won’t read up on their fortunes. I don’t believe it but I also don’t want to read it either!

There’s the usual information on my kind of horse. I’ve known (but tend to forget) that I was born in the Earth Horse year. Meanwhile, I don’t know what Keng Wu, Jen Wu, Chia Wu, Ping Wu and Mou Wu correspond to since the authors aren’t using standard Pinyin. A table a few pages back indicated that 78’ers are Mou Wu Horse. Also, the compatibility between Snake (NPY) and Horse, I’m vaguely familiar with as well, i.e., not great but not entirely bad. 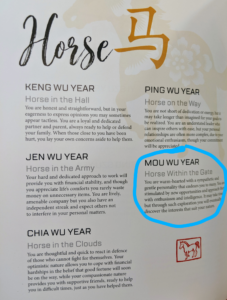 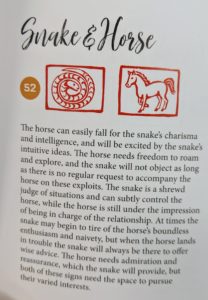 There is a particular forecast based on my lunar month of birth and day of the month. 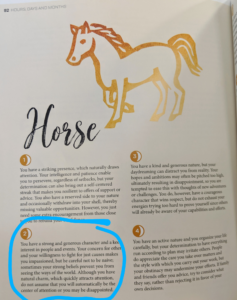 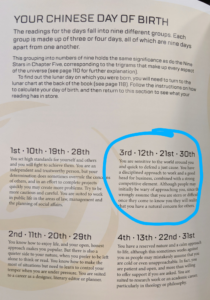 And then, based on my birthdate, my true career path was listed as Herbalist. I think that is the olden day equivalent of being a doctor – le sigh. (I also looked up my sister’s who is a lawyer and hers was “Manager” and NPY who is a banker and his was “Law and Order”.) 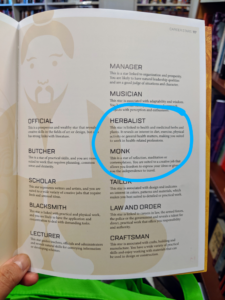 Fun stuff but nothing to take to heart!