It’s been four years since I’m at this point again, picking a Chinese name! Aside from learning the sex and picking an English name, this is the next most exciting part. It’s going to be nothing but rough for a while … years!

This time around, MIL re-articulated the process and I’ve learned a few new things. She mentions “beliefs” and such and I’ve tried to eschew superstitions that I don’t believe in and be the reasonable one yet here I am looking at this book with fortunes predictions and looking for balance between five elements and seeming superstitious. At the same time, I just want something that works together, be involved in her name selection, and use some rules, even if I only understand the calculation, to narrow down from billions of choices. I was truly feeling like I know just a small point on the whole iceberg when I was looking for the pages referenced by MIL to look into the options myself and flipping through tens of other pages where I had no idea what information was being imparted. Along the way, I learn a few new words!

As with kiddo’s name, MIL said it was tough. It is quite a responsibility and sometimes when you think you have one aspect covered, then you’ve violated another rule. The following are the options she came up with. Basically, it was all rejected – see below why.

MIL told me that she ruled out a character that is in her daughter’s name that fits the criteria because it’s not done to use a (close) relative’s character, no nods to elders, I guess.

I feel like this time, I got a better tour of the process while still only touching on the surface of the whole topic. So, here I go again, outlining the process MIL described to me, that I followed again while taking illustrating photos. Because these days – it’s the final stretch – I’m only sleeping like between 2 to 6 am!

1. Look at the total stroke count and associate fortunes. Since the surname has 15 strokes, I guess, we wouldn’t be considering a total stroke count of less than 30 because that would be ridiculously limiting. If someone has a ridiculously simple surname, e.g., three strokes, then the world is their oyster! MIL seems to think that she’s been using 32 and 39 for her children and relatives but it turns out kiddo’s total stroke count is 31. Mine is 35 and is marked with an “o” atop and that is not bad. “x” notation is bad. So, you’re picking a fortune for the kid by selecting the total strokes – what do you want the fortune to be?? I can’t read those descriptions and suspect it might be some super-formal horoscope lingo that I wouldn’t understand anyhow. MIL seemed to explain that 39 strokes was a particularly “strong” fortune she’s shying away from and superstitious people would wait until the baby is born and decide whether the 32-stroke fortune or 39-stroke fortune fits. We’re not like that so we’re just largely going to ignore the 39-stroke options.I’m going to guess that the overall fortune for a total stroke count is what is in parenthesis so for 32-stroke total, it’s “辛運” which means “lucky, good fortune” – heavily relying on Sheik, my favourite online Cantonese dictionary. Meanwhile, a 39-stroke total’s overall fortune is “富貫” which means “riches and power” – yeah, pretty strong sounding, and arrogant, in my opinion.Since I hadn’t known four years ago to mention in my post, my own 35-stroke total’s fortune is “平安” which means “peaceful” and is a-okay to me. However, other aspects of my name are in perfect contradiction, as I was reminded of below.

Since I didn’t take a photo or remark on kiddo’s 31-stroke overall fortune, I have included it here. His fortune is “知勇” which is a not a compound word as far as Sheik is concerned. The two parts of the word mean “knowledge” and “courage” and I don’t mind either in the least.

2. Find stroke combination for our overall fortune + surname. Then you go to the page with your surname listed and see the ideal strokes for the first and and second character to make up the total strokes you have picked. So, this page following also narrows down the total-strokes  you can consider for your surname as combinations for other totals are not given, i.e., MIL was considering the overall fortunes only for 21-, 31-, 32-, 39-, 47-, 48-, and 52-strokes. WHY THEY ARE NOT LISTED IN ASCENDING ORDER, I have no idea. So, you can see how if we went with 39-stroke total, we’d have three times the character combinations than 32-stroke total where you’ve got one path: first character has 10 strokes while second character has 7 strokes. 3. Which elements are compatible with your surname? Each character is associated with one of the five elements: 火, 土, 水, 金, and 木 (fire, earth, water, metal, and wood). The surname 董 is a fire element so what is it compatible with and truly not compatible with?

This is answered where they say things like “火生土” which I translate as “fire gives rise to earth” and is that true in that fire can change things up, bring about fertile soil? Let’s interpret also “土生金” … uh, you might find metals forming deep under earth? And it seems like in her initial search, MIL exercised the associative property in searching for a first and second character with elements 土 and 金, respectively. That is, 火生土生金. Makes enough sense to me! But she also told me that one of the characters (the second one) could be 火 again. Just don’t mix a water element in there.

I couldn’t even look up the character on the following page that indicates clashing elements. It indicate not to pair water with fire (or vice versa) and maybe not to put fire next to metal (it would melt).

The third image below shows the truly bad element combinations to avoid so for the fire-element surname, we have to avoid fire-metal-fire, fire-metal-water, fire-metal-wood. Got it! 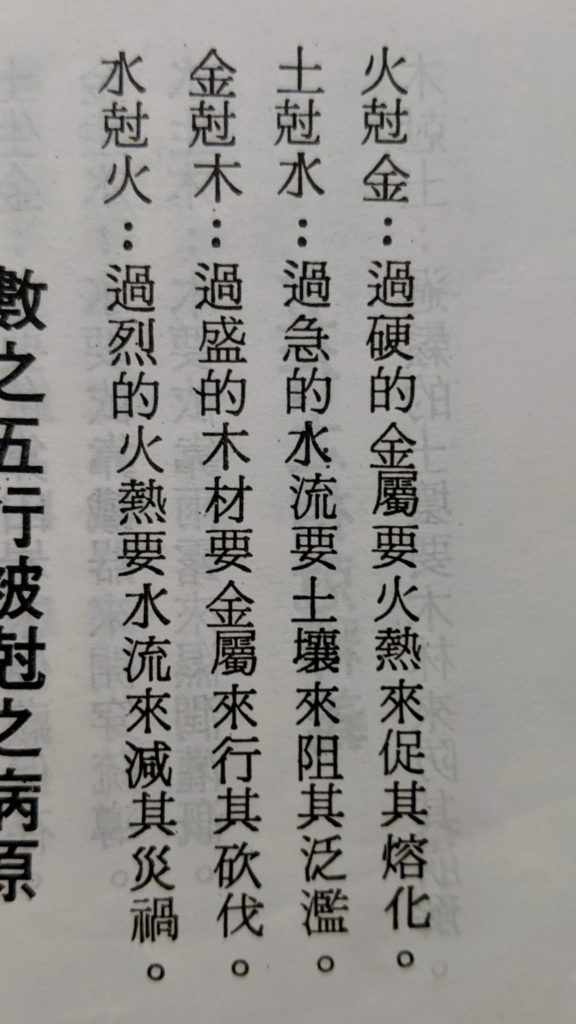 Are we having fun yet?
I am!
Finally, we can get to seeing the possible characters!

4. Generational name selection
Criteria: 10 strokes, earth element.
Preferences: keep in mind that NPY’s brothers child(ren) might use this one too, not too gendered, sounds nice to Chinese and CBC ears, not an ugly-looking character to write nor a difficult character to write nicely, not a stupid or bad meaning … ! 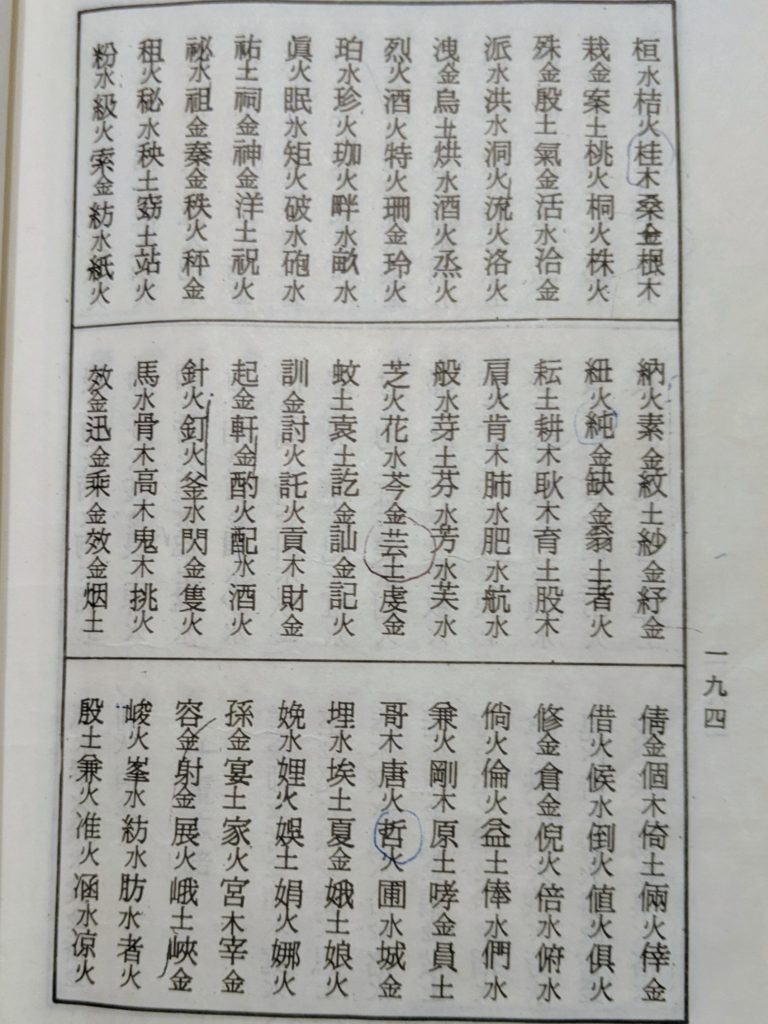 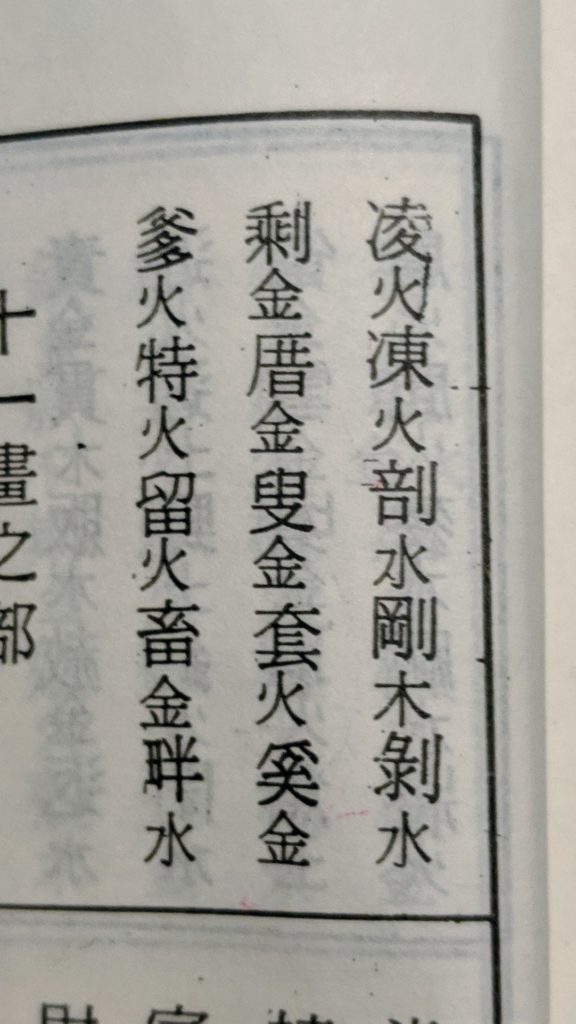 5. Second name selection
Criteria: 7 strokes, metal element.
Preferences: same as above except for the part affecting NPY’s brother’s child(ren) and in the case of this name – not generational – maybe a nod to my name?? 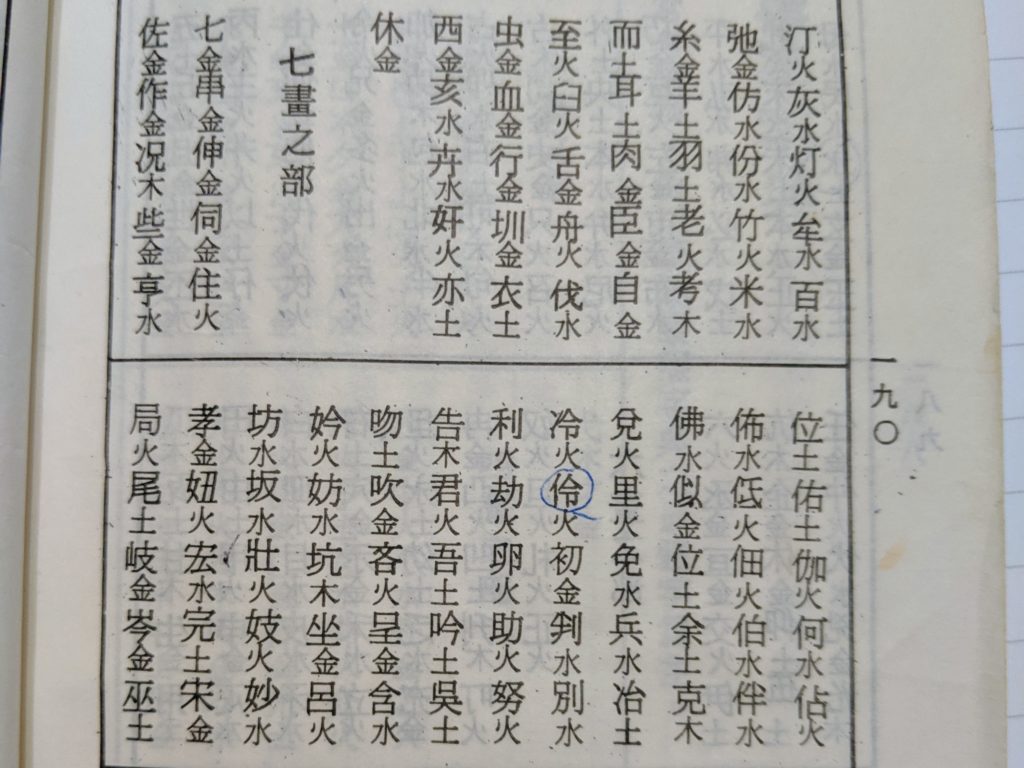 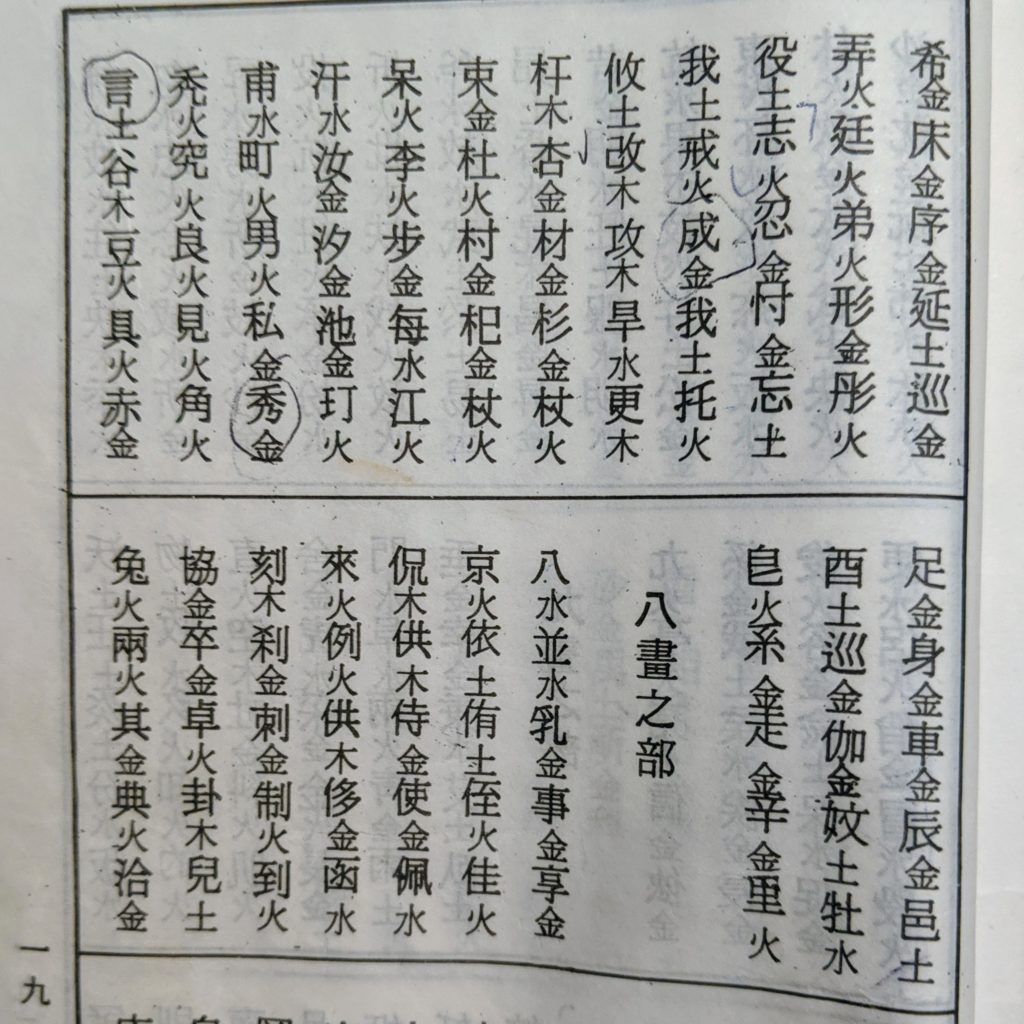 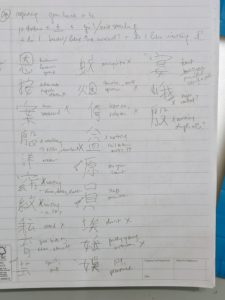 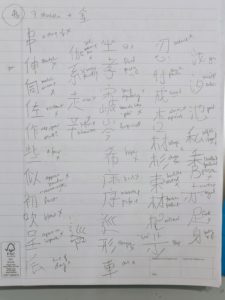 I was so disheartened by the choices and it was definitely eye-opening* to loop my mother into it. NPY doesn’t want anything to do with it after his initial bout, terrified of being caught between me and his mother. After feeling it was too restrictive and that she would rather be a “rebel”, my mother didn’t really want to have anything to do with it, citing, “It’s her grandchild,” as in, there will hopefully be another one or more Tung cousins via NPY’s younger brother later and even I probably shouldn’t influence the generational name just to suit my whims. How much of it is me being a “rebel” to initially dislike the two characters MIL likes best? I’d like to think before I knew how much MIL wanted those characters, I already didn’t wholly like them. After that, she mentioned twice she likes those characters – and that she’s already picked out the names for BIL’s first son and daughter … !

But here is why I will submit to the name 芸希: 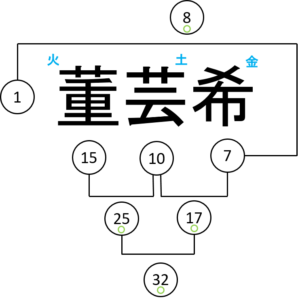 * Essentially, a lot of slagging on the numerology system that she’s never heard of before and thus thinks is entirely too restrictive, mind-boggling and 八卦, her favourite insult to suggest that something is entirely beneath her more intellectual mind. Look, she’s not reading physics and philosophy textbooks either! She wanted to decry that I’m being influenced by my in-laws and that I am falling for superstition like some old throwback crony.

One thought on “Chinese name numerology – Round 2”