When I was younger, I taught myself the American Sign Language alphabet. Why? Just ’cause. I was nerdy that way. It occurred to me in the recent past that I could teach sign language to the kid who (1) absorbs new information like a sponge at his age (2) exhibits interest in the alphabet. Also, we like seeing if he can be a circus act and “perform” on command, haha. British or American? Does it even matter if one is more useful? And perhaps in practice, sign language practitioners know both? I think the two-handedness of the British one is cute. And because British. 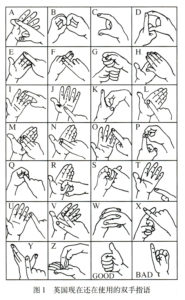 Information online seems more paltry but of course there is Chinese sign language (CSL) and the first alphabet systems predate the 1930s. But with changing Romanization and refining the ability to match our letters with Chinese pronunciation, a few systems came about including one that captures Zhuyin. (I swear, it’s on my bucket list to one day learn that squiggly notation.)

The unifying pronunciation and most resembling the English alphabets is the Pinyin version of the CSL alphabet. 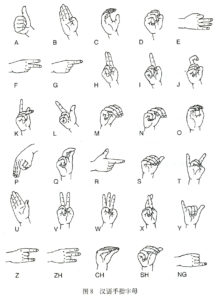 Conclusion: I’ll teach the kid the British system first and then Pinyin!

All images in this post from John Pasden’s Flicker and compilation of the information inspired by 2007 his Sinosplice post.