Recently, I started to think about my surname. We’ve all heard heard that some English surnames like Miller, Smith, Hunter, come from the occupation an ancestor had. And given my surname 駱 means camel, might there be an interesting story to that?

Cantonese speakers with surname 駱 might Romanize (spell) the name as Lok or Loc. (I can’t say I have seen or am fond of the aesthetic of the latter.) Alternate Romanization that looks very Westernized is Locke (e.g., Gary Locke). Less common is the way my father’s branch of the family spells it – Lock.

There is some pride in having one of the big surnames. My mother’s surname is 周 she would tell me how it makes it onto the top 10 or top 50 list and she would sneer how uncommon mine is. I never understood it because had I an English surname, I wouldn’t like have a common surname like Smith or Jones.

It is not new to me the definition of 駱 as camel, singly or strung together with 駝, as in 駱駝.

It is also not new to me the pretty cool definition of 駱 as “white horse with black mane” because it seems to describe to me/us, our physical appearance, at least the paler ones of us, haha.

So maybe there is an interesting story related to a special horse with black manes in my deep ancestry…?

Where is that in China exactly? 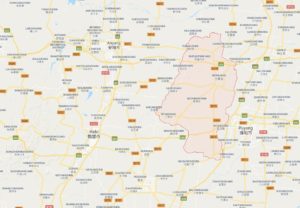 Finally, here is the couplet of surname Luo that I found.
I sent it to my father and he said it was gibberish. Then I told him it was as poem and it didn’t become any more clear because he didn’t know there were proper names in there.
My interpretation: Originally named Jiang Shang, Looking out from Nei Huang. Alternatively, it could be saying “hoping to leave Nei Huang” (Lok’s hometown)

One thought on “Light research into my surname, 駱”