My paternal grandfather, 爷爷, gave me my Chinese name. He also named my sister and two male cousins. While it is not the case in other families, my male cousins and my sister and I share the same generational name, the second character.

I’ve always liked my Chinese name. My surname means camel and it is fairly uncommon. It even has as a radical, the character for horse (馬), which is my Chinese zodiac sign. The more popular surname that sounds the same is 樂, which means happiness. The second character, as mentioned above is the generational name that ties my name with my sister’s and my cousins’, 文, means literary and I like to think that it comes from the artistic side of my late grandfather who passed away when I was just four or five years old. The unique part of my Chinese name is the last character, 慧. It is half of the common word for wisdom, 智慧, and I guess means wisdom on its own, too. Besides appreciating having a solid name meaning wisdom, perhaps I also like the character because its pronunciation starts with a “w” sound like my first name.

I’ve always liked my Chinese name and have been saddened – in the height of my identity crisis a couple of decades ago – it wasn’t used by anyone. My maternal grandparents referred to several of their twelve grandchildren by their Chinese names but not me and my sister. I wonder now if my mum didn’t want to use the name that her in-laws gave. Or she was so “modern” that she made her parents work with our English names. 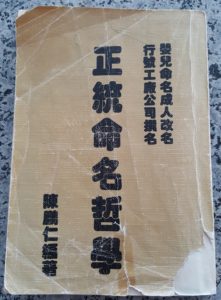 My MIL named her three children and she also came up with the Chinese names for her five nieces and nephews who carry her maiden name. Since I was named by my grandfather, I thought it would be a patriarch’s domain (i.e., her father’s) but if she displays the most interest in it, why not let her?

I gather that of her children and nieces and nephews, I’m the one who displays the most interest in this subject and I also have the most background knowledge. It is not merely that she is naming my future child, but that is certainly a factor in my interest!

At first, MIL was pulling together names she liked, counting the number of strokes in the characters and guessing what would be auspicious. But then she dug out the naming book from her storage room packed full straight from a Hoarders episode and guided me through the process. Now, I can look things up and cobble together a name with the correct strokes to be auspicious… but I can’t read the fortunes associated with the numbers! 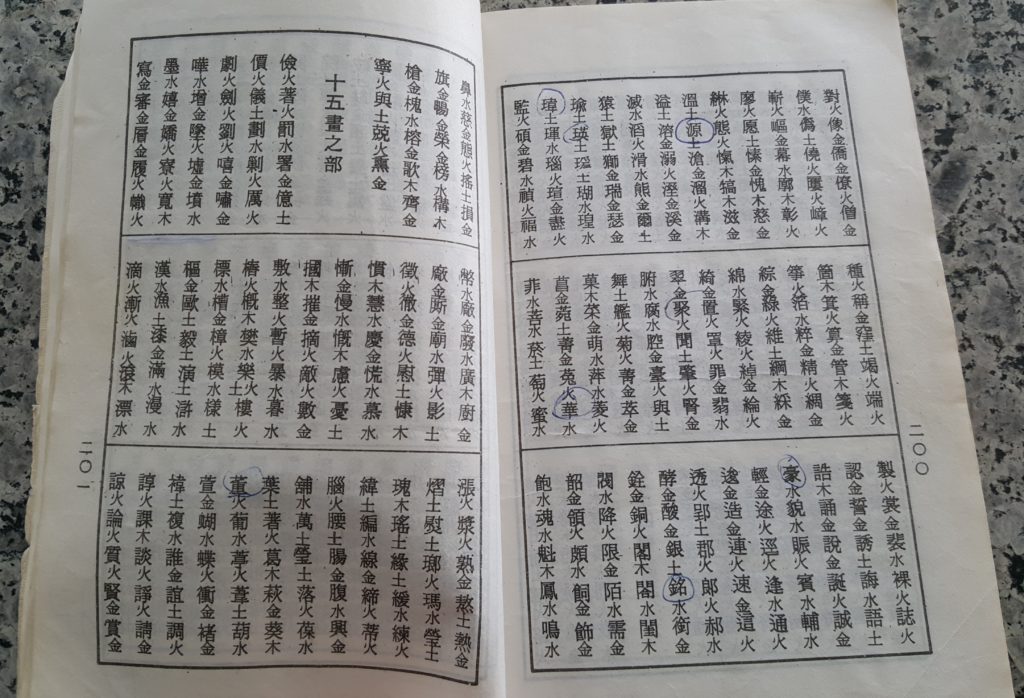 Here is the process of reading the numerology of a Chinese name:

In the case of my name above, the total strokes for all three characters is 35 and this is a good number, denoted in the book with a circle. MIL read the fortune to me and I can’t remember it all but it was acceptable. (And what if it wasn’t??) Then we added the strokes to determine my early life fortune and later life fortune, neither of those numbers, 20 and 19, are lucky, marked with an “x”. MIL is not a master interpreter and reassured me the entire number is good and that’s all that matters!

Further, my surname has a “fire” element which is okay with the “earth” element of my generational name. But the third character is a “water” element that clashes with the fire but we’ll shrug that off, too.

Then, aside from the numerology calculations, to help you narrow down from the still large number of possibilities, there are personal considerations:

So, MIL came up with a generational name: 俊. I’m not previously familiar with this character and find it tricky to pronounce and until I get the hang of it, I might say it wrong! It’s also a bit of a balancing act to right the character, ensuring it has a solid enough base. The character was first defined to me as “handsome/pretty” and I was resistant. I’m not sure I wanted a physical attribute to be part of the name. But it also means “talented” so I’ll take it.

Then, MIL presented me with the options for the unique part, the third part of the name:

While we are keeping the English name under wraps because – who knows, it might change – it’s different with his Chinese name. A Chinese name is full of calculation (literally!) so I feel like I can share it. It’s more of a “prediction”, a statement, than something that NPY and I have privately enjoyed as “our little secret” for several months.

Interestingly, MIL found that, just as in English, boy names were harder than girl names to find. Also, this name will set the precedent for any other child we might have and the one(s) NPY’s brother has in the future.

We also know that we won’t be putting the Chinese name on the birth certificate. This is the stance NPY’s family took for the three siblings. Meanwhile, both my sister and I have our Chinese names as part of our legal names. There’s an argument for both avenues. NPY and his siblings never had to deal with spelling out their Chinese names the way I did and the horrid spelling my parents selected. But I find it a little sad their Chinese names are not at all a part of their life, not used by grandparents either. So, when I asked NPY which way we’d spell the name, using Pinyin or Wade-Giles, he was seriously baffled. He had never “spelled out” his own name before, never needed to. We concluded that, if forced, it would be spelled the Cantonese way to match his Cantonese surname and neither of us are fond of the “zh”, “x” and “j” so prevalent in Pinyin!

It’s one thing to look up the fortunes for my early life (past) and whole life (going on) but then it started to feel like we were predicting/setting a life on earth not yet begun! Wild! And cannot be taken overly seriously. :P

5 thoughts on “Chinese name numerology and other considerations”